It was a quick turnaround between events. Before I knew it, we were in Canberra for National Capital Tour, the hardest Tour on the calendar.

I had spent the past 5 days between Amy’s Otway Classic and Nat Cap Tour recovering from the smash fest that it was, and stressing about my elbow, which still wasn’t 100%. One week had passed and I still wasn’t able to get on my TT bars without pain. With the first stage of the Tour being an ITT, I was worried that it would ruin my chases of a top 20 finish. That worry aside, we had a strong team, with little Claire, Jaz, Cass and Kimbers (her first race back after injury and wielding the home ground advantage) ready to put our climbing legs on for the weekend. Zeke tour master Mechanic and Super DS Bec were there to support us. It was going to be a great weekend of racing and consuming our weight in peanut butter, honey and bananas.

Day 1 – Stage 1, 17km ITT
We woke to a blue sky and zero wind. Perfect conditions for an ITT. Let’s just say that I didn’t have the most ideal time trial I’ve ever had. 1. My elbow was still sore and 2. I slightly misinterpreted the course map and veered left one corner too early. That cost me probably 30 seconds of braking, turning around and trying to get my speed up from the biggest-big-dog-big-ring possible. I spent the next 5km cursing myself and pushing 30 watts too many before I realised I was on the way to implosion. Which almost happened, after the turn around I was cooked. I had gone too hard to make up time and then was rapidly passed by another rider – they had managed to get 1 minute on me in about 10km. I managed to finish in 20th position. This tour had us starting at the crack of dawn, on one hand it was a pain because it was cold, on the other it was awesome because we had the rest of the day to relax. So we did just that. Spent the arvo packing our TT bikes back up, laying horizontal, consuming peanut butter and honey (on rice cakes) and preparing ourselves for Stage Two’s epic race. 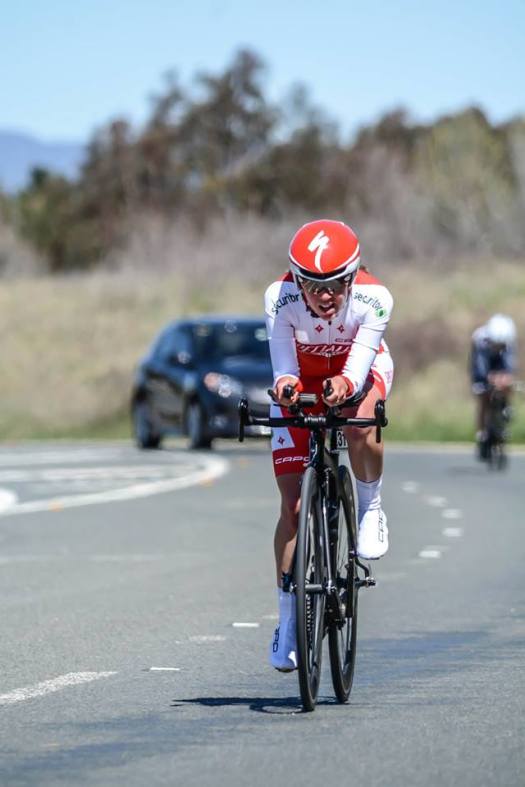 Day 2 – Stage 2, 120km road race, finishing on the Honeysuckle climb
5:00am and the alarm went off. Race start was at 7:30am and a balmy -1 degree. Claire had come down with a head cold and scratched from the race, so we were down to a team of four. This was going to be a hard day in the saddle for the following reasons: a) The race is 120km b) there are 7 QOM and sprint points c) There are 7 categorized climbs d) we climb 2500m of elevation e) There is a nasty hilltop finish after 10km climb… enough reasons?

We did not have a race plan as such. It was going to be one of survival and for Cass and I to get to the bottom of Honeysuckle climb with the front group. There were a couple of climbs that could split the group along the way, including Mt McDonald and the Three Sisters so it was important to stay alert and stay with the group. We knew that there were some strong teams in Suzuki, Boss and Holden who would put the pressure on, the race would be on from the gun.

Almost cruely, 9km into the race was the first climb and the first QOM point. Yep. Feel that lactic burn. 10 km later I found myself off the front. On a solo stupidity mission, as the peloton let me dangle out like a carrot in front of a donkey, I was probably the donkey. They let me stay out there for enough time for me to pick up a sprint point, then was reeled in on Mt McDonald by a little Boss rider, then on the crest, the group got me too.

I can’t remember too much of the rest of the race. There were some attempts at getting away, we were covering everything we could. There was a nice dead section where Kimbers took the opportunity to go back to the team car to feed us. I felt so pro as she sidled alongside with a jersey full of bidons! Before we knew it we were at the pointy end of the race and tension was building. I was so busy pedaling that I didn’t even realize that we had already climbed over the Three Sisters. While we were sleeping, Lisa Keeling (Bicycle Superstore) and Emma Viotto (Suzuki Brumby’s) went up the road. Perfect. That meant that Holden would have to chase. We chased for the next few kilometers before the bunch launched into the bottom of the climb. Riders, including me, were being shelled.

I trailed off the front group of 15 or so riders who set a tempo too fast for me. Cass darted off into the sunset. Somewhere along the way we caught Lisa and Emma, and the predictable was playing out – it would be Ruth and Ellen 1 and 2. So I just kept riding,  picking off who I could. Gee Honeysuckle is a biatch. It has sections that feel like 20% and you start to feel like you are going backwards. I ended up finding a second wind and managed to crest the hill in 10th position and 11th on GC.

It was a Ruth, Ellen and Alexandra Nichols (Suzuki Brumby’s) that rounded out the podium. Cass came in 13th, Kimbers 29th and Jas 29th. We were smashed. We spent the arvo in the hotel pool, eating and sleeping – wondering how the hell we were going to back it up with the double day which awaited us.

Day 3 – 80km road race around Lake Burley Griffin AND a 38km (brutal) criterium at Parliament House
We had nothing to lose today and everything to gain. We had a very clear game plan: 1. Be aggressive, attack and try and get in a break, 2. Take the win 3. Move me into 10th on GC. On the line we were tired, but so was everyone else. We had a job to do.

As soon as we were rolling we knew that it was on. The girls had a couple of stellar stabs at getting away, only to be chased down. Eventually, when Jess (Total Rush) launched, it did get away. Georgie (BikeBug NextGen) and our Jas joined her up the road and they rolled turns and got a lead of up to 1.20! Holden and Suzuki started to get on the front and bring them back with 2 laps to go. Race plan was going well. The girls stayed away for 80% of the race, taking every single time bonus along the way. As soon as they were absorbed into the bunch, Cass attacked again – just to keep everyone honest. At the pointy end of the race, Kimbers launched her way up to the front. I knew that the only way I was going get a few more seconds was to finish in the front of the group. So I did just that – moved up. There were a few corners leading in to the uphill sprint, Kimbers was in prime position and bam – sprinted for the win. I managed to finish with a few seconds up my sleeve and moved up to 10th on GC. Race plan achieved. I can’t describe the feeling of elation when you realise that your race plan has worked. We jumped around with excitement, with Zeke, Claire and Bec (who had been biting their nails in the team car all day) as the reality sank in. Kimbers WON! The girls did a great job responding and attacking. Jas spent most of the race off the front, came in 20th and Cass rode soooo well coming not far behind. 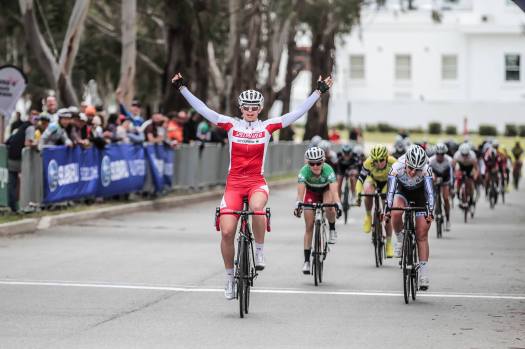 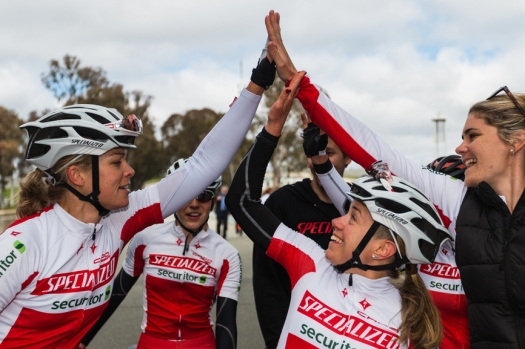 Stage 4. Parliament house criterium
By the time we got to the criterium, we were all cooked. I was nervous as all hell. Unlike club crits, in the NRS if you drop off the back of a crit, you are pulled off the course and given an average time. I knew that to retain 10th on GC I’d have to finish the race. This course was hard, one side was uphill, one downhill. 40 laps, 38km. My legs didn’t want to do it. I had my usual pre crit combo of a gel and a can of V and I was as ready as I’d ever be.

The race was on. Just keep going, I looked up to see how far we were into the race… 5 laps… It felt much, much longer. 35 to go. I tried to stop myself from counting down and concentrated on staying towards the front. This was not working like I’d hoped. Ellen, Ruth and Allison Rice managed to break away on the first lap and the bunch was left, sort of chasing. Kimbers was on the front trying to rally more troops to bring them back. I tried and failed to join her every lap and pretty much stayed in a stagnant position. I was in the hurt box. There was no way I could have moved up, as much as I tried to go and help her. It ended up being like that for the rest of the race. As the laps counted down, half the field was shelled. I was still there. Just.  Ellen, Ruth and Allison rode their way to the podium. Race over and I looked down to see my Garmin, still at 0. I had forgotten to press start. Oh well, I didn’t really need it to tell me that my heart rate average would have been 200 and my watts very high.

Stage 4 results can be found here. 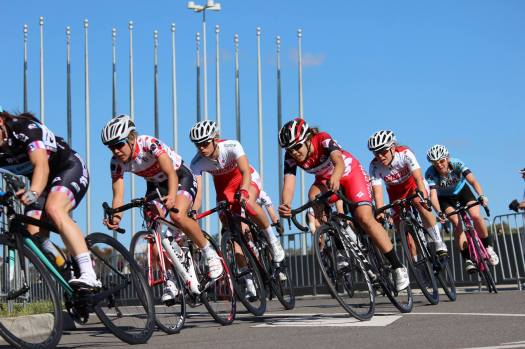 Race over and the mad rush began to get the bikes packed up and get to the airport. By the time we did do that, I was bonking big time. My legs were shattered, my brain was not functioning. I was relieved to get home, eat two bowls of muesli and pass out. I love going on tour and recounting what we ate – this one we consumed two jars of peanut butter and honey, 2 packets of rice cakes, 3L of milk and 10kg of bananas.

We finished 6th in teams. On GC I finished in 10th, Cass 13th, Kimbers 28th and Jas 32nd.  NCT certainly lived up to expectations. It is definitely the hardest race on the calendar. I’m so proud of the team. We worked so well together, we did our jobs, executed our race plans and had a great time doing it. And I had my first top 10 finish on GC. This was the hardest one, but my best finish yet! Can’t wait for the next race, the final one on the calendar, Tour of Goldfields. More peanut butter and honey, more rice cakes, more bananas…. and more gels.

Until next time. Get on your bike and ride it! (PS I finally took my throbbing elbow to the doctor, diagnosis…bursitis.)

Full results can be found here. 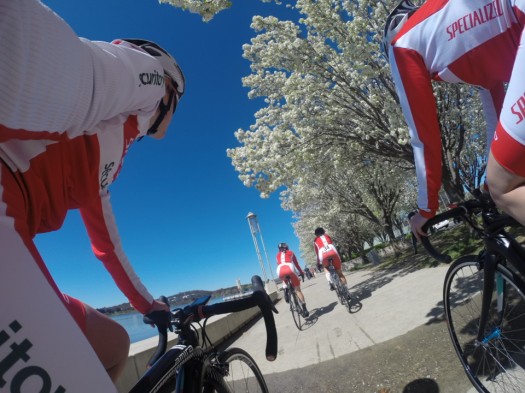 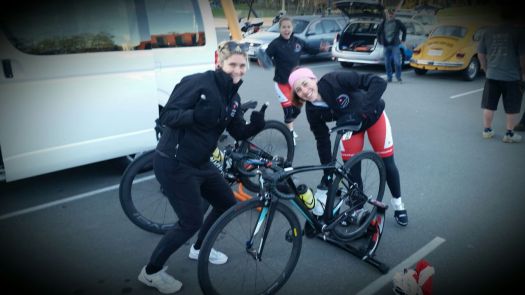 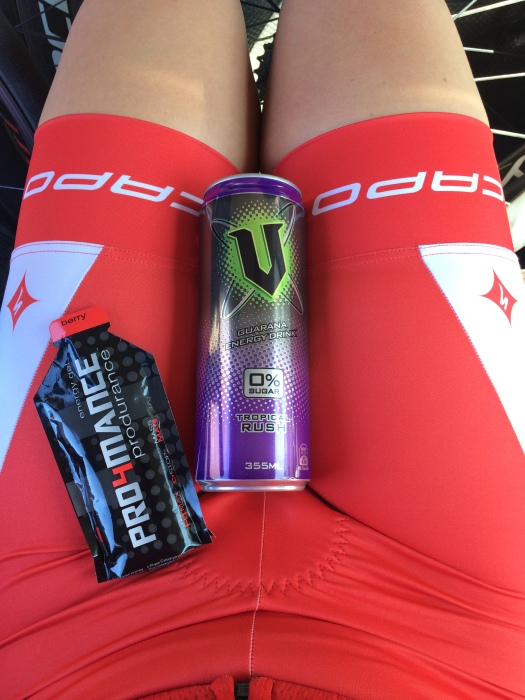 One Reply to “National Capital Tour: the hardest one, but my best one yet”