After a stellar three weeks holiday pedalling up the famous mountains of Italy and the Pyrenees, my body decided to punish me for returning to Melbourne’s dreary winter and I spent a uncomfortable 5 days in bed with a temperature of 40. One could say that I didn’t have the most ideal prep for the upcoming Sam Miranda Tour of the King Valley. But hey, by the time Friday rolled around I was back on my bike and was excited to be racing my first NRS tour with Specialized Securitor and not to mention we were racing in my home town of Wangaratta! 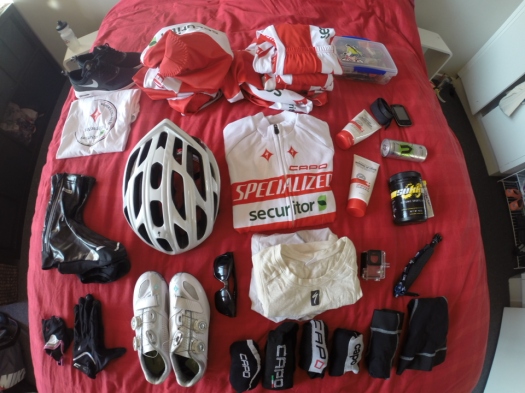 We arrived at Wangaratta on Thursday, after a detour via the airport to pick up my new team mates. We had a full team, Sophie, Ash, Cass, Josie and Jaz plus super DS Bec and super mechanic Zeke. We were here to race Sam Miranda Tour of the King Valley, a four stage race held over three days. It is arguably the best on the women’s NRS calendar, with a TT, crit and two road races. 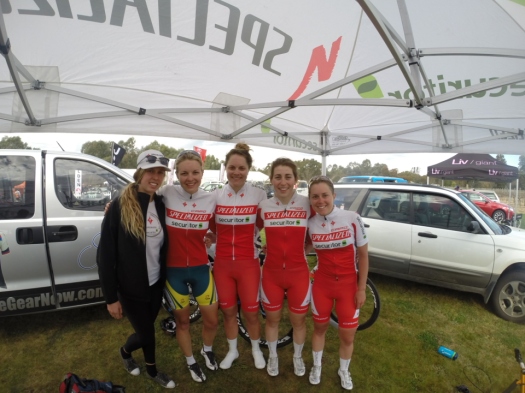 The King Valley had certainly turned on the weather for Stage 1. It was blue skies all round. The TT was based out of Dal Zotto Winery and featured a 20.7km lumpy course. Bec our DS had set us our aims. Which were to ride hard, try to break into the top five. Pre race we had our bikes checked by the officials. Slight fail there with Josie’s and Cass’s Shivs not being UCI legal, so they had to ride their roadies and my tiny Transition needing its saddle put back 10mm – not going to be the best fit. The course was going to be a great one for inflicting pain, the rolling hills hurt the legs and the headwind home provided a bit of unwanted resistance. I was nervous about the TT. Mainly because I hadn’t been on the bike all week and was unsure if my legs and heart would handle 200bpm for 30 odd minutes. Nerves were channelled into the legs off the start ramp and I concentrated on keeping a solid pace. Nothing much to report along the way, my nose was running like a tap, my legs were heavy pushing too big of a gear and the headwind home made for a very snotty finish. Ash had a stomper of a ride, crossing the line in 2nd position and climbed herself into the QOM jersey. The team had three riders in the top 20. Thumbs up. Full results can be viewed here. 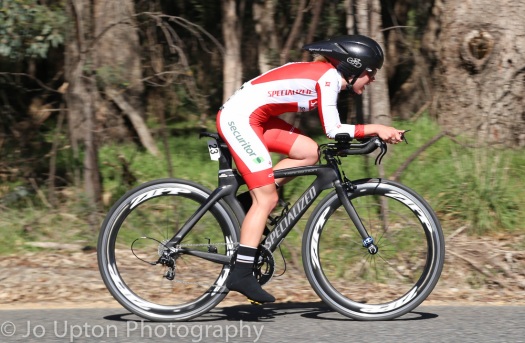 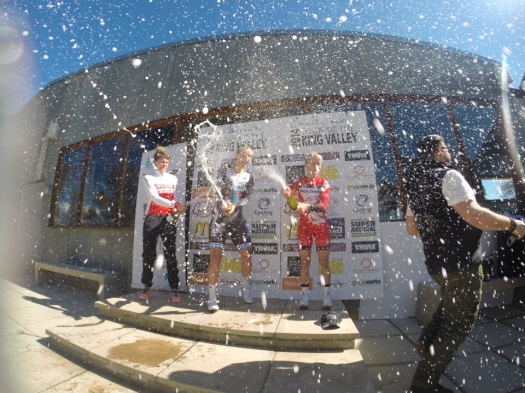 After the TT we packed up the bikes and headed to the next stage, a 38 km Crit (or rather a Kermesse) at the Wangaratta aerodrome. The laps were a long 3.3km, with two hotdog style corners, on a cheese grater surface that would make for interesting riding. Last year, the weather made this crit horrible as we raced in torrential rain and gail force winds. This year it was the exact opposite, relatively still and the sun was shining, perfect. We knew that this one was going to be an aggressive race, so that was going to be our objective. We had nothing to lose and everything to gain. The race was just that. Aggressive. Riders were going off the front, but no-one was letting anything get away. We were doing our best to cover breaks and attack when we could. It was a battle to hold position, like a washing machine that we just kept churning around in. I was struggling to hold my position – it was so frustrating getting squashed out around the corners and then having to spend the straight moving up. Nothing really significant happened for the entire race, apart from Josie getting a flat, and Cass and Jaz throwing some attacks into the fold. So we just prepared ourselves for a bunch sprint. We knew it would be critical to hit that last corner in top 5 positions to have a chance at the podium. So thats what we did, we got Ash around that final hairpin bend and bang, she battled it out for 4th. The rest of the girls finished with the bunch. Her result here meant that we held the QOM jersey, 2nd on GC and we are 2nd on Teams Classification. It was now time to go home, lay horizontal and consume as much peanut butter and honey on toast as our stomachs could handle. Full results can be viewed here. GoPro YouTube video of the crit can be viewed here.

We welcomed the later start for Stage 3, fitting in a 200m coffee ride and some time to bask in the sun. The 102km road race had 3 intermediate sprints, 3 QOMs and one 6km gravel section called the strade nero. This gravel section could potentially make or break the race, so our objective was to be aggressive on the climbs, and do everything we could to maintain 2nd on GC and in teams classification. We started off after neutral at a rather leisurely pace, only really ramping up after the first sprint point. We were all climbing well and made it over the first two QOMs comfortably. Somewhere over the QOMs a breakaway group of riders, including our rider Sophie ended up the road with a good amount of time on the main bunch. This was ideal, because Ruth was with us in the bunch and they were taking any bonus time points away from her. With the strade nero approaching, we made sure that we were at the front and started the climb at pace. Ruth had attacked and bridged over to the lead group of riders. Despite Ash’s saddle dropping and her having to pedal with her knees around her ears, we made it over the climb just behind the race leaders. We smashed the descent, a vast contrast to my descent the previous year… where I did a similar climb, only to get dropped on the descent. It was my mission not to do that this year. We formed a group of about 15 by the time we got to Whitfield, we rode the next 20 or so km together. Nothing exciting was really happening, the bunch kind of sat up. There were a few attacks here and there and we were responding when necessary. Gradually, the riders that were left behind on the climb, sorted themselves out and caught us. Most of the peloton were all together with 20km to go. Then we just went through the motions. As we got closer and closer to the finish, the bunch started to swarm and things got a little hectic. Unfortunately with 2km to go Sophie crashed. She hit the deck pretty hard. Before we knew it, we were sprinting for the line. Job done. As suspected, Soph had not only broke her collar bone, but shattered it. It was a huge day with mixed emotions for the team. Race wise we were very happy with the day and how we were riding, but sad to have lost Soph, she was riding so well! Full results can be viewed here. 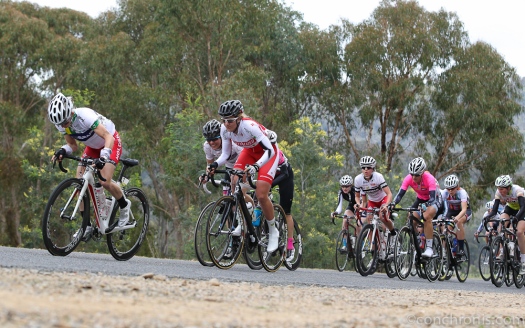 Stage four was an 86km road race, with two QOMs and not much time between Ash and Ruth (Holden Cycling), it was important for us to grab as many QOM time bonuses as possible to retain 2nd on GC. That was it. Our aim was clear. The race was aggressive from the start, with riders going off the front left right and centre. Early on as the rolling hills started, I managed to get myself in an early break with three other riders. That was short lived as we weren’t going to be let get away, we got reeled in soon promptly. That was going to be the going for the majority of the race. Attacking and catching. The first QOM was fast approaching and teams started to organize themselves towards the front. You could feel the tension brewing. The pace ramped up significantly in the lead up to the 1km to go sign, to prevent anyone attacking early and riders were launched into the climb. Our team all made it over with the group, with Ash sprinting over the top grabbing 2 points behind Ruth. This splintered the group somewhat. Though the bunch came together on the decent and we again were preparing ourselves for the next QOM. Again, the first 500m of the climb were fast paced, waiting for the inevitable attacks to happen. Making sure Ash was in position was critical because when Ruth kicked, Ash had time to respond and again managed to get 2 points behind Ruth. We crested the climb and the decent started. The next section was slightly downhill for 10 or so kms, so it was fast. Very fast. This is where an attack went and got away. A Bicycle Superstore rider Crystal, Boss and BikeBug-Next Gen rider Juzzy went into the distance. The next few kilometers the bunch cruised along, with various teams making an attempt to bridge over or reel the breakaway group in…until about 10km to go when the breakaway had a good minute on us and everyone seemed to panic. That’s when the pace started to pick up and the group started to chase. 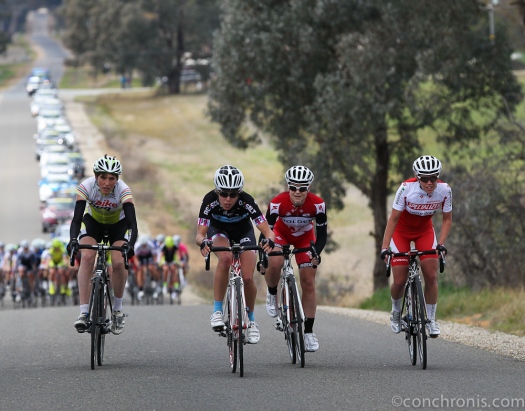 Fast forward a few kilometres and the bunch was sprinting for the line. The breakaway had stuck. The team all crossed it in the chase bunch, with only our bonus points in tow. Ash set herself up for the bunch sprint for 4th spot leaving 9 seconds between Ash and Ruth. Our job was done, we protected Ash’s 2nd place on GC plus 2nd place on Team’s Classification. Full results of the stage can be viewed here. 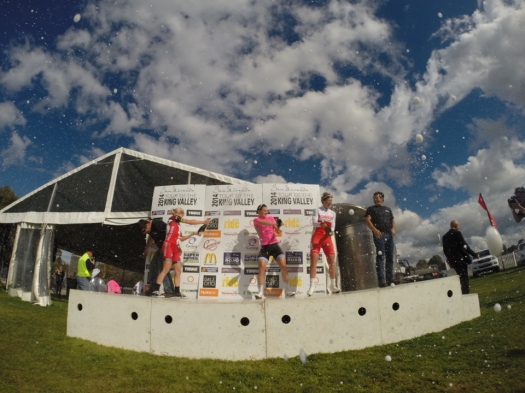 The team all rode strongly this weekend, we had a good result, ate lots of peanut butter, drank lots of coffee, enjoyed the sunshine, had Prosecco showers and most of all, had fun doing the thing we love, riding our bikes. Fast. Though sad to have Soph injured with a confirmed broken collarbone, but that is racing and she’ll be back soon enough (actually she is probably on the trainer as you read this!).

You can see the full GC results here and the official gallery of images and videos here.

Finally I just wanted to say thanks to everyone involved in this tour and especially for supporting women’s cycling. The team and I really enjoyed racing the Sam Miranda Tour of the King Valley, it is one of the best races on the calendar. A huge thank-you goes out to Bec Domange our DS and Zeke Ashworth our mechanic for keeping us and our Amira’s in order. Also thanks to our legendary sponsors Specialized, Securitor, Capo and Adidas for getting us on the road in the first place.

Until next time, get on your bike and ride it. 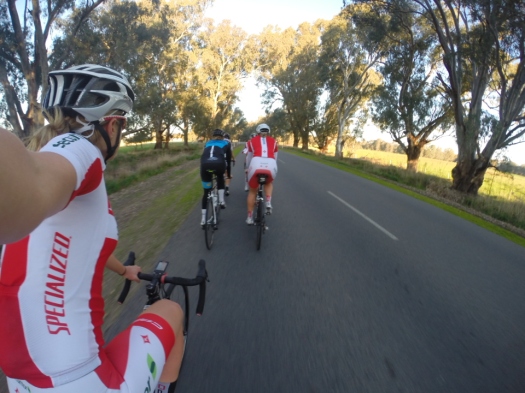 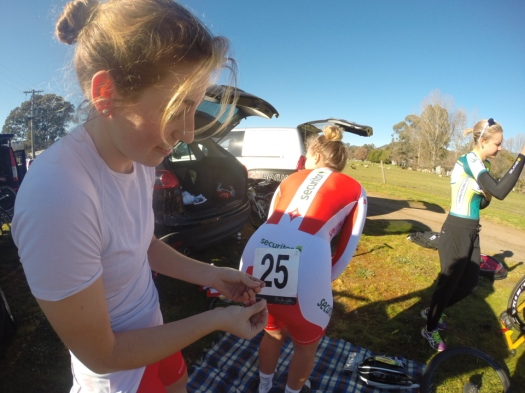 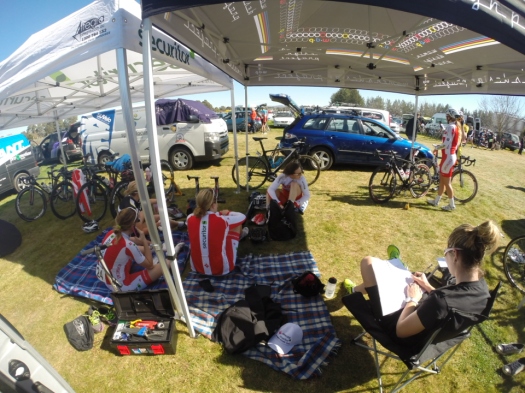 One Reply to “Sunshine, Prosecco and Sam Miranda Tour of the King Valley”