Lets just say that I was not enthused at all about riding the Mt Donna Baung ITT. It was a real case of CBF from my part, especially when I woke it to torrential rain.

I was off at 9:30 am and it was a 1.5 hour drive out there. It was raining, I mean belting down. I checked the radar and it was not looking like it was going to stop anytime soon.  I tweeted @CyclingVictoria, with the hope that the race was cancelled. It wasn’t. So I reluctantly dragged myself into the car, Purdie driving and we set off into the washing machine to the start line.

I had never ridden Donna. I only studied the profile for 15 minutes or so the night before, from what I could work out, Donna is just a steady uphill climb. No real false flats, no real pinches, just steady. My race plan was simple, I had a goal in mind to try to maintain 220 watts for the entire climb and/or keep above 16/17km per hour average, this would get me a time of +/- 1:03 minutes.

My enthusiasm to race didn’t get any better on the drive out there, in fact, I fell asleep quite quickly. I was not looking forward to racing in the rain. But thank god I wasn’t doing the Warburton Road Race, like my teamie Kate Perry was. Don’t get me wrong. I’m far from a fair weather rider. I commute every day, rain hail or shine. But pushing yourself to the limit in the rain, is less than ideal, especially when the finish line is at the top of a mountain at 0 degrees.

We arrived at the start line, and I sat in the car. Delaying the inevitable warm up. Purdie almost pushed me out of the car. Just get on your bike and ride it. So I got on the trainer and did a half effort warm up. Reports that it was snowing at the top was not encouraging me to go any harder.

I was off at the head of Mens A grade. I had my goals, just needed to stick to them. Don’t focus on the wet, or the cold. Just focus on the numbers, I thought.

Within the first 10 minutes, I was passed by the whole of Mens A grade that started behind me. Not long after, I realised that my trusty Garmin was having issues. As I wiped the beaded water from the screen my speed was going from 6km/hr to 30km/hr. I was confused. Was I going too fast, or too slow? It was affecting my distance measure too. I had no idea how far I had gone. How hard was I pushing… well I forgot my heart rate strap, so that was another number I was missing.

I don’t know why I was stressing, I could barely see the screen anyway, it was still raining…so I just thought to myself, #nogarminnorules. Suck it up and ride. My legs felt like rubbish, full of lactic. I was stressed that I was going to hard, I I had no idea how far I had to go or how hard I was pushing. I was too much in the hurtbox to take my hands off the handlebars. I just kept spinning as fast as I could. I started to pick off other riders. As I gained elevation the visibility became poor, I was riding into a cloud. Finally I saw the 5km to go marker on the road.

This is where I started to get into a rhythm, then before I knew it. It was snowing, and I crossed the finish line. I put my 100 layers on, and descended with no idea of the time that I did. I got changed and got in the car, and waited for the results to come out. As we drove back home, I was anxious at what time I did. I felt like I did a good time, I pushed hard, but I had no idea how hard I really went. I just rode as fast as I could.

57:23 was my time. Remarkable, I was not expecting that time at all. 2nd fastest time by a woman! 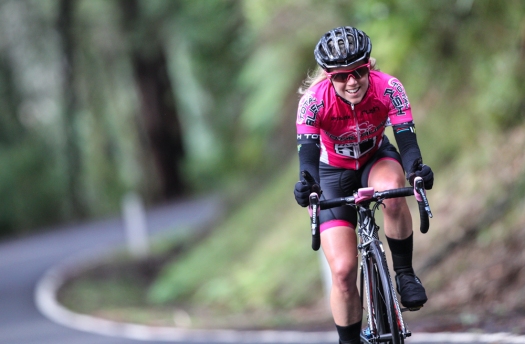 There is something to say for riding without the stats. Just riding as hard as your body will let you. #nogarminnorules, sort of. It was fun, but next time, I’d prefer my Garmin was visible.

There was an error retrieving images from Instagram. An attempt will be remade in a few minutes.